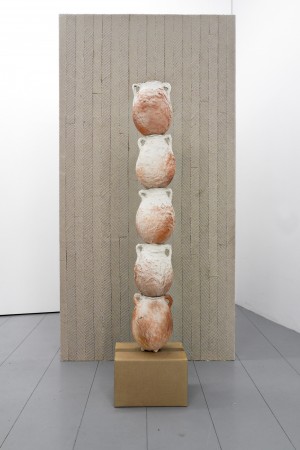 The images you are seeing on television
you are seeing
over and over and over
and it’s the same picture
of some person
walking out of some building
with a vase
and you see it twenty times
and you think:
my goodness, were there that many vases?

Maitre has displayed a body of works comprising a set of paintings on paper, on rope, and cotton, using various techniques such as acrylic and spray paint, inkjet print, batik, dye and collages. The body of work constitute the attempt of the artist to create a different cinema as a tool to meditate on early XX1st century mediatic events, such as the looting of the Iraq Museum of Baghdad on april 9th 2003. Maitre’s meditative cinema techniques is inspired by 1960s film maker Paul Sharit’s logic of frozen film frames, and 1940s film maker Len Lye’s aesthetic. The imagery he uses is a retake on a 1919 work made by Hannah Hoch, where the fragmentation of the Weimar republic is reconstructed through collage. Abstract patterns are created through chance based compositions made with ropes and brushstrokes as well as patterns inspired by industrial gear wheels (Chevron Patterns) and the representation of circles in buddhist culture.